END_OF_DOCUMENT_TOKEN_TO_BE_REPLACED

Delegation of foreigners to France. The French government is trying to introduce more stringent regulation for employers delegating employees. In addition to the mandatory minimum wage, which is strictly controlled. There are additional manifestations of increased administrative and fiscal responsibilities in enterprises delegating employees.

Delegation of foreigners to France is not an easy puzzle.

According to the French Labor Code (art. L.1261-1 do L.1263-2 i R.1261-1 do R. 1264-3), the delegation of employees to France is a complex situation. An employer with headquarters in Poland instructs his employees certain tasks what will be performed in France. And only after finishing of their task employees will return to their company and country.

International business trips for employees are:

When you are going to delegation employees to France from what should you start?

What goes first before starting work in France with our employee, a citizen of a country outside the European Union? The first step is to ensure that this employee has a valid travel document (visa or passport). The second one is that he has been legally hired in Poland. Further action does not make sense without this. In addition, there is an obligation to notify the labor inspectorate in France because of where the service should be provided. This tax was introduced since the entry into force of Decree 2016-1044 of July 29, 2016. It determines the conditions for the submission of these declarations.

Delegation of foreigners to France. For how long can we delegate employees? What qualifications should they have?

The duration of the business trip may vary depending on the specific task and last from one day to several months. However, delegation should always be temporary, not permanent.

Required qualifications relate to professions, for example: doctors, taxi drivers, architects, accountants, insurance companies. In the case of these types of employees, you should be aware of specific legal settlements and related documents. So, that’s how employees can perform these professions in France. Keep in mind that the delegation of foreigners to work in France must meet the formal requirements for these professions.

Delegation employees to France. What documents may require the French Labor Inspection from the employer?

Supervisors are authorized to require from the employer the documents to be drawn up in French and put the amount in euros (read Art. R. 1263-1 of the Labor Code):

Keep in mind that all documents mentioned above must you provide to the inspector without undue delay, already translated into French.

You cannot rely on personal data protection arguments such as protection of personal data, commercial secrets. They are ineffective in period of checking by the Labor Inspection. The refusal to submit the necessary documents, in extreme cases, can be interpreted as a criminal offense aimed to make difficult of carrying out the supervisor’s tasks of Labor Inspector. Such actions may be punished with a year of imprisonment and a fine of €37,500 (art. L. 8114-1 of the French Labor Code). 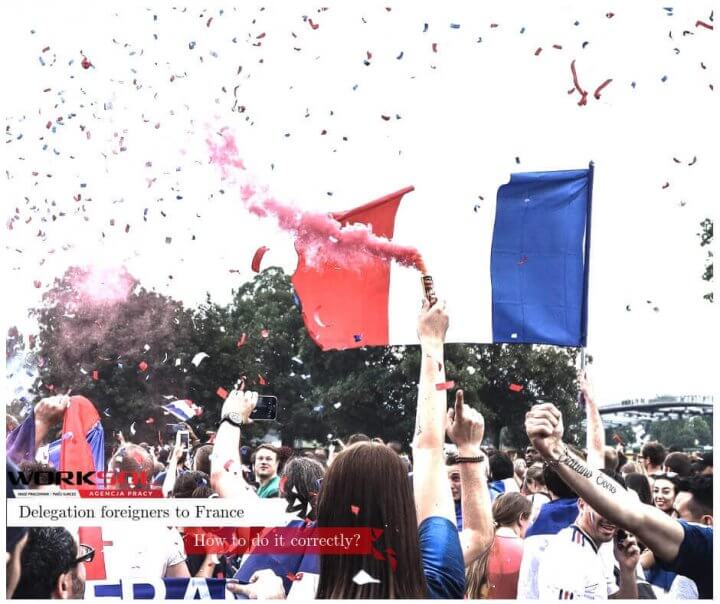 Delegation of foreigners to France. What is the purpose of the control of the French labor inspectors?

Above all, the purpose of the control by the French labor inspectors is:

Recently, the French Labor Inspectorate regularly expands the problem of control in compliance with the conditions of employment on the implementation of the dominant economic activities in the host country territory.

The goal is to eliminate unfair competition and the use of delegation instead of employment in France. The local courts decisions go in contrary to the rules of jurisprudence of the Court of Justice of the European Union. They have a negative attitude towards enterprises delegating employees. Very often judgments about abuses in delegation are issued. In cases of serious violations of the law on this issue, the inspector sends the inspection reports to the French Prosecutor’s Office. It may initiate a criminal case against such entrepreneur.

Delegation of foreigners to France. What are the most common results of inspections conducted by the French Labor Inspectorate?

What if the Labor Inspectorate finds serious violations committed by a Polish employer delegating foreigners to work in France? he considers that the submitted documents contain false information. Or he considers the violation by the employer or his representative of the obligations for filing documents of employees.

You should pay your attention on this information:

In such cases, the inspector sends an appeal to the employer, with which he calls him to restore the legal status immediately, within a certain period of time. ( art. L. 1263-3 of the French Labor Code).

If the employer within the prescribed period hasn’t paid off debts, the prefect of the region may suspend the execution of the Polish employer of cross-border cooperation of services for some period. But this suspension mustn’t be longer than one month. The decision will be withdrawn at the time of restoration of status in accordance with the law (Art. L1263-4 of the French Labor Code).

The French Labor Inspectorate has no obligation to draw up a report of the inspection.

As mentioned earlier, the French labor inspector doesn’t have the obligation to draw up a report of the completed inspection. Therefore, it is possible that after inspection the employer will not receive any decision from the Labor Inspectorate. This, however, may be a good information indicating that you have not found any deficiencies in the cross-border provision of services.

In the event of a violation, the inspector will most likely direct his attention and may send a fine. To determine the amount of the fine, the Labor Inspectorate considers the circumstances. And the scale of the violation of the law. And the behavior of the offender and the scale of his economic activities.

Fines for the most common violations:

These violations are punishable by a fine of €2,000 from each seconded worker.

Sometimes the amount rises to €4,000 from each employee in the event of the recurrence of the same violation within one year from the date of the first fine. The maximum total amount of the fine cannot exceed €500,000.

In August 8, 2016 appeared a new and the most recent amendment to the provisions of the French labor code called EL KHOMRI. It imposes new sanctions on employers for improper delegation of employees. The same sanction suspends the work of the relevant service for a period not exceeding 1 month. This threatens if the Labor Inspectorate fails to receive a delegation declaration within forty-eight hours from the moment the employee is delegated. (Art. L1263-4-1 of the French Labor Code).

If the employer, despite the decision to suspend the possibility of cross-border delegation of employees, will continue to delegate employees? He shall be punished with a fine. The prefect of the region creates a punishment based on a labor inspection report. The fine may be based on a sum of 10,000 euros for one delegated employee (Art. L1263-6 of the French Labor Code).

In case of an accident at work, in a situation where:

Then the enterprise to which the employee or the employer is assigned is obliged to notify the inspector about the work of the place where the accident had occurred. And the filing of the “accident declaration“.

Remuneration of a seconded employee to France

The main tariffs, that are in force at the time of the delegation, shall be established in accordance with the remuneration rules. This provision is stipulated by French law. Employers that are doing delegation foreigners to work in France must to remunerate each seconded employee by the French rates. It means that:

Employees should receive next things for a placement period (for more than 1 month) in France:

What expenses are associated with a staff delegation?

The employer must return to the employee additional expenses incurred in connection with the delegation (travel expenses, accommodation, etc.). For delegated employees are not applied the provisions of French labor legislation concerning the conclusion and termination of employment. This also applies to the presentation of personnel, training and social security. In these matters Polish law are applied.

Delegation of foreigners to France. What to do in case of stay of delegated employees for more than 90 days?

In the case when the term of work involving delegated persons for a period longer than three months (90 days), the employee is obliged upon arrival in France to apply to the relevant prefecture with an application for a residence permit (CE – salarie prestataire de service communautaire ). Thus, he applies for employment in France, in accordance with the current legislation on the work of foreigners. It is important in this case, when rules are arising from the employee’s business trip expire.

I can say with complete confidence that the delegation of employees to France is possible and beneficial for Polish enterprises. If employers do all by the law, both Polish and French, they should not be afraid of legal sanctions. Polish entrepreneurs can make full use of their staff in carrying out orders that are useful to them in France.

Do you need help?

Recruitment agency WORKSOL is recruiting, legalizing of stay, employment and delegation of third-country nationals to EU member states for years! We make every effort to follow the dynamically progressing changes arising from international directives. We always are glad to help, if you want to make sure that you have knowledge of the current legal status, get information about it.

Ladies and gentlemen, you have read an article that was written by a Polish employer. This article about issues concerning delegation employees to France. In particular, Ukrainians and other foreigners to work in France. Do you want to entrust the design of all the formalities of a professional company engaged in legalizing the stay and work of foreigners? Contact us! We do everything as soon as possible and at an attractive price.

Authors of the article “Delegation of foreigners to France”:

Translator of the article “Delegation of foreigners to France”::

Are you looking for job?

In our database there are many attractive job offers from Poland and abroad. Every month we sign dozens of employment contracts with Polish companies

Are you looking for employees?

We have hundreds of candidates ready to work in the near future. Our Agency provides more than 100 employees per month for Polish employers. We recruite specialists and nonqualified employees

Do you have questions?

Subscribe to our newsletter and you will receive daily, current vacancies !

We use technologies, such as cookies, and collect browsing data to give you the best online experience. Continued use of the website means that you agree to the use of cookies.Agree